If you are interested in history, then the Normandy landing beaches of 1944 that you will find in Normandy should interest you. But in what order to tackle it? We offer you today a small circuit of the landing beaches from east to westfrom Bénéauville Castle to Utah Beach at the extreme west of the course. You will find the circuit map at the end of the article, and also directly on Google Map by clicking here.

From the Château de Bénéauville, take the direction Bénouville, to the west. Then head for the town of Lion-sur-Mer and the beach of Sword Beach, the first landing beach of the circuit. On this beach you will find among others the monument of freedom dedicated to British and Canadian fighters. You will discover the history of the landing of the 41st commando that liberated Lion-sur-Mer in 1944, as well as the incursion of the 21st Panzer. 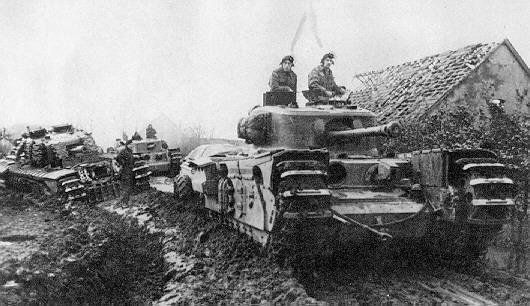 Next to the monument is a Churchill float on display, donated by General Harris. This model of British tank greatly contributed to the success of the landing and the decisive victory of the allies.

Step 2: to Juno Beach and the Royal Winnipeg Rifles

Let's continue our tour of the landing beaches with Juno Beach. Follow our itinerary and you will find yourself on a small car park, close to the Royal Winnipeg Rifles monument. This Canadian infantry regiment was among the first to land at Juno Beach and suffered heavy losses in the battle.

Indeed, the beaches were heavily defended, as you can see by crossing the street of Marshal Fosh, to the west, to cross the mouth of the Seulles. After crossing the bridge, head for the beach and you will quickly fall on the remains of a German bunker. In front of such a building, one can only imagine the extent of the task of the soldiers during the landing.

Continue a little on the beach to reach the Juno Beach Memorial.

In the third leg of our tour, we will stop at the Stanley Hollis memorial. This hero of the landing showed himself by opening a single way to his soldiers towards Ver-sur-Mer, then destroying the battery of the wildfowl. Finally, King George VI will award him the Victoria Cross. You will find at his memorial the details of his extraordinary history.

Take advantage of this stop to stroll on the beach of Gold Beach, and let yourself be impregnated by the winds of the sleeve. For that, direction Asnelles. Enjoy a bite to eat at one of the many restaurants in the city!

Omaha Beach, it is certainly the most known place of the landing of Normandy, and for good reason: dedicated to the American army, it is this beach which lives the most losses with the allies. It has thus sadly remained in history as a place of tragedy and heroism.

To go there from Asnelles, you will have to arm yourself with a little patience and get around Bayeux. Fortunately, 40 minutes drive are nothing since you just eat well in Asnelles!

Our tour of the D-Day beaches continues with Omaha Beach, specifically the Omaha Beach Memorial Museum. Enter, enjoy the museum, then think about visiting the American cemetery of Omaha beach.

Step 5: If you have some time, visit Pointe du Hoc!

This cliff of thirty to put high ends in a needle advancing courageously on the sea. If the landscape is beautiful, this point was the scene of tragic events during the landing.

Indeed, this point was a strategic area of the German defense and had been very fortified. Its height and unobstructed view made the point the ideal place to place long-range artillery pieces, and that had not escaped the German army. Thus, it was necessary that the allies quickly manage to take the tip of the Hoc to stop the artillery fire on the beaches of the surrounding landings.

The fortified position was conquered at the cost of heavy losses, to finally discover that the famous artillery pieces were not present: they had been moved pre-emptively inland, far enough to continue to fire the allies without risking being taken in the early days of the battle.

If you stopped at the Pointe du Hoc, the day must now be well advanced. It's time to conclude our circuit of the landing beaches with Utah Beach. In July 1944, General Leclerc's second armored division landed at Utah Beach with the firm intention of securing the coast.

This beach was one of the least deadly for the allies. The German army had actually strengthened it less, because its geography seemed disadvantageous to a mass landing.

In Utah Beach, you can find several memorials to the Allied fighters, including the United States monument (photo below).

You have finished our tour of the landing beaches

And now, you've finished our tour of the landing beaches. If you managed to do it all in one day, congratulations! It is now time to relax and rest in a calm and relaxing atmosphere. For that, let's be honest: nothing better than our rooms of time, in the castle of Bénéauville.

After a tough day reliving the history of the Allied landings of 44, return to the castle and enjoy all the comforts of our 16th century guest rooms. Stroll through the gardens, and have a good night's sleep in one of our suites. Pleased to welcome you !